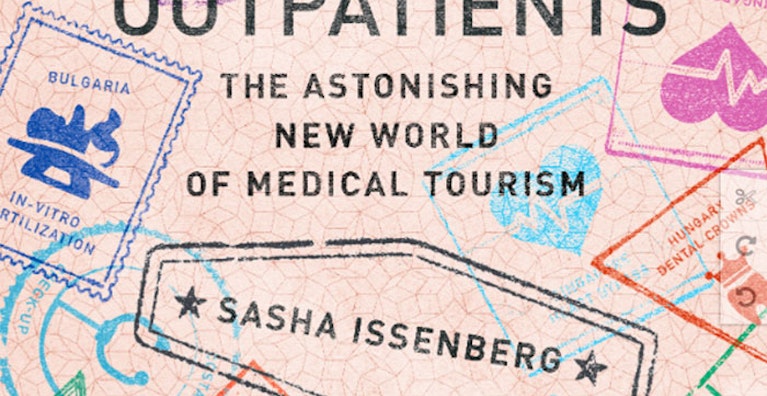 “I was reminded of the many levels of dislocation involved whenever an individual decided not to let her ability to imagine a healthier self be constrained by the boundaries of her home nation.”

The Tokushukai Medical Corporation operates more than 280 hospitals in Japan, enough for the company to often find itself described as the world’s largest hospital chain. In 2006, Tokushukai opened its first overseas facility, in Bulgaria, and I had been prepared for its incongruity amid the dreary blocks south of Sofia’s downtown. “If you drive there, you will drive through a really bad area, then you see there is some kind of an island,” Robert Gerl, the Munich-based CEO of the Bavaria International Health Association, told me. Indeed, the Tokuda Hospital Sofia did stand out from a distance — a nine-story ivory puzzle piece in a sort of corporatized-Bauhaus style — although indoors there was little besides Japanese prints adorning random corridors to distinguish its unusual heritage.

It wasn’t until I walked through the orthopedics ward that I fully appreciated what kind of incongruity was possible within the modern hospital. Part of the reason Tokushukai officials had selected the Sofia site was the promise of serving patients throughout the region, but Tokuda began drawing them from other continents as well. Eastern Europe was becoming a destination for Middle Eastern knees, and Tokuda became popular with patients from Oman, one of several Persian Gulf states suffering from abnormally frequent joint injuries. (The culprits appear to be stress from repeated bending at prayer, along with the high rates of non-fatal car accidents that typically accompany a country’s belated motorization.)

During a tour of the facility, a hospital staffer mentioned to me the significant number of knee surgery patients from Libya. As Libya’s civil war raged on, the country’s already limited medical system became even more overcrowded, and Tokuda contracted with authorities there to receive their patients. The staffer gestured toward an open door, and when I poked my head past the threshold, my eyes met those of a woman tucked into the bed, and then those of a man I assumed to be her husband hunched over her. His hand clasped hers, a gesture of comfort that appeared unable to weaken the uncertain fear frozen on her face. A head covering suggested the expectation of modesty, which I was clearly in the midst of defying. I didn’t know what to say, or in what language I would possibly say it, and neither did she. I moved along, wordlessly, steadied by the relief that I could not be the source of her anxiety. Here was a Libyan woman trapped in a Japanese hospital in the Bulgarian capital, all when at her most vulnerable. At this point, could the momentary intrusion of a strange American man with a notebook possibly faze her?

Medical tourism can best be defined as cross-border travel for the primary purpose of securing treatment. The term may suggest carefree holidaymakers, but like the Libyan knee patient, many medical tourists are engaged in a uniquely modern form of rebellion, asserting an individual’s independence from the persistence of political geography.

Medical tourists have come to represent a small but revealing new tranche of the worldwide middle class, empowered to arbitrage inefficiencies created where a previous era’s institutions of political economy — namely insurance companies and national regulatory régimes — had failed to keep up with a new era’s interconnectedness. In an increasingly globalized world, national governments may be losing control over flows of money and information, but they are still responsible for health care. Medical tourism exists only because the great triumph of liberal government in the twentieth century and the neoliberal project of free movement for people and capital have proven fundamentally irreconcilable. What happens when all the other national boundaries fall and the most salient difference between neighboring countries is in their health care systems?

I had ended up in Eastern Europe because a sequence of political transformations had dramatically accelerated the pace of that reckoning. In the 1990s, centrally planned medical systems in former Soviet Bloc nations were exposed to domestic market forces, introducing competition for patients into a health economy that had previously known no notion of profit. Just as they were beginning to calibrate a post-communist balance between the competing interests of the marketplace and the welfare state, the countries of Eastern Europe sought entry to the European Union. In so doing, they opened themselves — their borders, their banks, their operating theaters — to any European who wanted to access them.

Almost instantaneously Eastern European countries found themselves inevitably part of what the Canadian health researcher Ronald Labonté has described as a worldwide “gold rush of primarily private, but also some public, providers in low- and middle-income countries attempting to capitalize on what they perceive to be an unfilled demand from the wealthier and demographically aging North.” My reporting in Hungary and Bulgaria is an attempt to trace the opening of one sluice in this gold rush, and its effect on the people and institutions it touches. Is medical tourism destabilizing one of the last remaining pillars of the welfare state or reinforcing it?

Many critics of medical tourism cast its existence along familiar lines of global inequality, with the implication that it is impossible to reconcile a health care system that profits from serving foreigners and one that succeeds in serving the local community’s needs. In Tokuda Hospital Sofia’s orthopedics wing, that conundrum was given a face. What did the presence of a Libyan woman in a Bulgarian hospital bed mean for a Sofia resident with knee problems? And could Libya ever develop a modern health care system if all the local patients who had a way of financing their care took their problems — and their money — elsewhere?

It was easy to caricature medical tourists as the world’s haves taking medicine from the mouth of its have-nots, but the woman before me certainly did not project an air of entitlement. I was reminded of the many levels of dislocation involved whenever an individual decided not to let her ability to imagine a healthier self be constrained by the boundaries of her home nation.

Six Signs it's time to visit the Dentist