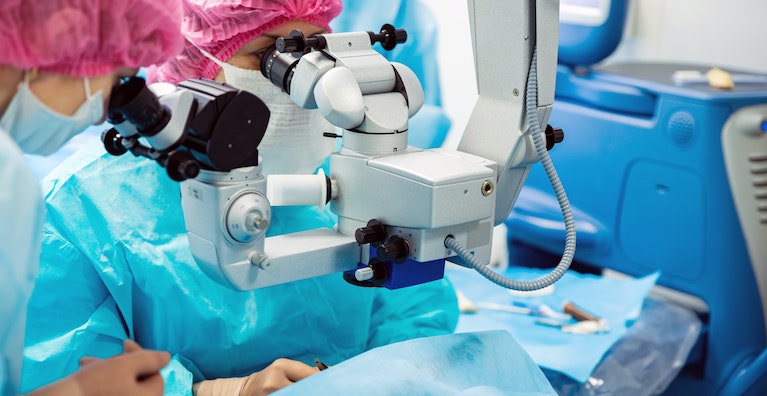 When is the right time to get your Cataract operated

Age-related cataract is a chronic, slowly progressive opacification of the natural lens of the eye that ultimately results in symptomatic disturbance of vision. Globally, cataract is the leading cause of blindness and impaired visual acuity and cataract surgery is one of the most commonly performed elective surgical procedures in the western countries. As the opacities grow in size and depth, there is progressive deterioration in quality and quantity of vision.

The oldest known technique of cataract surgery was Couching, possibly practiced by the ancient Egyptians and Babylonians. Though written evidence of this procedure is found in “Sushruta Samhita, Uttar Tantra”, an Indian medical treatise (800 B.C.) written by Maharshi Sushruta, an ancient Indian surgeon. The diagnosis of mature cataract was easy because of the white pupillary reflex and inability of the patient to see anything, except light, from that eye. Many centuries later, in 1747, came the procedure of cataract extraction by Jacques Daviel. His method involved leaving the capsule of the lens in the eye, which was something like the ExtraCapsular Cataract Extraction (ECCE) of the 1970ies. It remained the prevalent approach for cataract extraction for over 100 years, until the 19th century, when Intracapsular cataract extraction (ICCE) became, for a time, the preferred method of cataract removal. The ICCE involved removal of the entire cataractous lens (including the capsule). It was first performed by Samuel Sharp in 1753. With improvements in operative tools and techniques, there was reemergence of ECCE in the 1970s as the preferred approach over ICCE.

Earlier the surgeries were being done without implantation of an artificial lens (Intraocular Lens-IOL) in the eye, leaving the patient aphakic in the operated eye. This meant that the patient had to wear very high powered plus spectacle lenses after the surgery, with all the associated problems. In 1950 the first PMMA IOL was implanted by Sir Nicholas Harold Lloyd Ridley in England, resulting in a much better quality of vision than with ICCE. In 1967, an American ophthalmologist, Charles Kelman, revolutionized cataract surgery when he introduced phacoemulsification (often referred to as “phaco”) as an alternative approach to ECCE. Phacoemulsification involves ultrasonic emulsification and aspiration of the lens through a considerably smaller (3 to 4 mm) incision compared to the conventional incision of ECCE. It is now considered the safest and the preferred method of cataract surgery. The small incision size has led to much shorter recovery times, less postoperative astigmatism and better visual results.

The timing of surgery is a matter of weighing the benefits against the risks, and particular attention has to be paid to the patient’s wishes and lifestyle. More patients are being operated at a younger age and with better preoperative visual acuities. The annual number of surgeries is increasing and is expected to double within the next two decades. This probably reflects increasing demands for optimum visual function by the patients as well as improved outcomes and safer procedures, lowering the physician’s threshold for advising surgery. By and large the physician’s dictum in the Hippocratic oath of “do no harm” has determined the indications for cataract surgery over time.

The expected postoperative visual results are important when advising the patient on whether to have cataract surgery. It has been found that the postoperative objective and subjective visual improvement is independent of preoperative visual acuity. There is a lack of scientific evidence to guide the clinician in deciding which patients are most likely to benefit from surgery. What is of utmost importance is, a thorough preoperative examination of the anterior and posterior segment (retina and optic nerve) of the eye. This is essential for assessing the expected visual outcome and planning for any anticipated intraoperative and postoperative complications. The preoperative evaluation of the retina and optic nerve may be challenging in patients with very dense cataracts. Potential vision tests, such as critical flicker frequency and optimal reading speed, potential acuity meter and laser interferometry, have been suggested as indicators of postoperative visual gain, but their predictive value is limited.

Per the American Academy of Ophthalmology Preferred Practice Patterns, the indications for cataract surgery:

For good results and a satisfied patient, it is very important to assess the visual goals of the patient. This means factoring in their lifestyle, distance and near vision needs, the desire for reduced dependence on glasses, their financial resources, and their satisfaction with residual refractive error. The surgeon determines the suitability of different options to achieve these goals. This involves selection of the right type of IOL, astigmatism correction during surgery and coordinating with the other operated or unoperated eye. The patient should be counseled in multiple formats, such as written material, videos, by speaking with a technician or counselor, and by speaking directly with the physician.

Cataract is a unique age related change that has a very satisfactory treatment in the form of cataract surgery with Intraocular Lens implantation. There is no perfect time for the surgery. The decision, about when to get operated, effectively lies with the patient, once the doctor decides that there are no contraindications to the surgery.

Weight gain in COVID-19 and how to flatten the curve